Never Waste A Crisis: Use Bad Times to Leap Ahead in Good Ones

To say that 2020 was a year of crisis is an understatement ... and the difficulties are not going to let up just because we move into a new year. That’s why, at our Backstop Beyond 2020 event, we asked Owen West, named by Business Insider as “The Most Badass Banker on Wall Street,” to be our keynote speaker. Owen served as Assistant Secretary of Defense for Special Operations and Low-Intensity Conflict from 2017 to 2019, which makes him an expert on handling crises effectively. He gave a powerful presentation at Backstop Beyond 2020 on how to turn adversity to your advantage – both personally and as an institutional investment organization. Here are three of the top insights from Owen’s keynote address.

1. A crisis is a time to develop your character.

Owen first attempted to reach the summit of Mount Everest in 2001. While he did not quite succeed (though he was very close), he gained a valuable lesson from watching one of his team members. Whenever there was downtime, this woman did not relax. Instead, she used the opportunity to prepare her gear, visualize her goal, and plan her next steps. She reached the top, impressing on Owen that “Adversity cannot be controlled. What we can control is how we react in tough times. This is the essence of character.”

2. A crisis is a time to strengthen your team.

Owen has participated in the Eco-Challenge marathon multiple times. The Eco-Challenge has been named “The World’s Toughest Race.” In it, teams of four compete in a 7-10 day race, covering hundreds of miles and traversing all types of remote terrain. Owen described how the Eco-Challenge shattered his perception of limitations while simultaneously ingraining in him the truth that “team dynamics trump individual skill.” He affirms that overcoming adversity depends on great teamwork, stating, “You never competed within the team. You certainly pushed your individual limits, but team competition is not good for the culture and dynamic in the end.”

3. A crisis is a time to increase your compassion.

Owen served under U.S. Secretary of Defense James Mattis as Assistant Secretary of Defense, Special Operations and Low-Intensity Conflict. In watching General Mattis, whom he lauds as “the ultimate leader,” Owen learned not to let passion for excellence override compassion for people. This is always true, but never more so than during times of difficulty such as we are experiencing today. He notes, “Hold people to account, but still understand what they have gone through and what they are going through.”

By using the current crisis as an opportunity to develop your character, strengthen your team, and increase your compassion, you will be well-positioned to succeed in 2021 and beyond. For more insights on how to use bad times to leap ahead in good ones, we encourage you to listen to Owen’s full  keynote address. 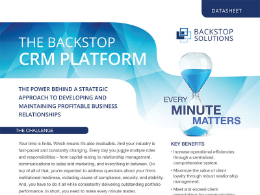 Right-Sizing Your Tech Stack in a Shrinking Economy

The Glowing Up of Backstop

By: Adam Hoit, CPO, Backstop Solutions Group Do you know what “glowing up” means? I must admit, I did not....
END_OF_DOCUMENT_TOKEN_TO_BE_REPLACED